The main market for delivery systems as studied here is the pharmaceutical industry. Similar interest exists in the Home and Personal care industry and the Food and Flavor industry, where controlled delivery of active ingredients is equally important. To outline the importance of these markets, it is estimated that the pharmaceutical industry alone experienced a 4.4% market growth per annum until 2020 and invests around €150 billion in R&D expenditures.

Micelles, spontaneously forming from for example block copolymers in aqueous media, have been extensively studied as a potential carrier of poorly water-soluble drugs and other active components, but uptake pathways and stability of micelles have not yet been clearly understood. Almost one-third of newly discovered drugs are highly insoluble in water, but there is no standard method to solubilize such drugs. As a result of the capability to load lipophilic molecules into the hydrophobic core, polymer micelles have been widely used to solubilize and deliver poorly water-soluble drugs. An in-depth insight into the physical and chemical behavior of micelles is necessary for designing the next-generation delivery systems.

In the DPD method, molecules of a fluid are grouped together to form fluid elements, or beads, that interact via soft, short-range forces. surface. At concentration levels between 3 and 6 % in aqueous solutions phospholipids spontaneously form lipid bilayers, Figure 1 shows such a bilayer composed of a Dipalmitoylphosphatdycholine (DPPC) type lipid with symmetrical hydrophobic chains simulated by Dissipative Particle Dynamics (DPD), using the LAMMPS DPD functionality within Scienomics MAPS platform. 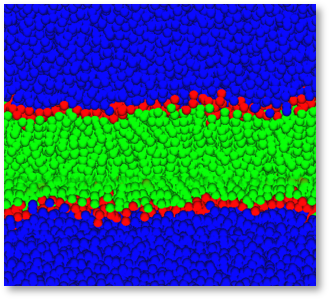 Furthermore, we investigated the commercially and scientifically relevant micelle/ cell interaction, which we simulated by bringing a micelle and a lipid bilayer in contact using the same simulation method. This phenomenon is highly significant for micellar drug release, since the speed of release of the drug can be directly calculated in relation to the composition of the micelle.

For the activity of any active ingredient it is important to understand how the active interacts with the inner membrane, and whether it is released into the cell itself. Experiments have shown, that the hydrophilic shell even of polymer micelles is not totally inert. It has been observed that polymer micelles enter cells by means of endocytosis. The results of a DPD simulation of such an event is shown below. A micelle drifts towards a cell membrane and gets in contact releasing its drug. The sequence of pictures in Figure 2. illustrate such an event, it shows the micelle before, during and after contact with the membrane. Clearly it can be observed that the phospholipid micelle is integrated into the bilayer and the active compound (light blue) is released into the hydrophobic inside of the bilayer.
The presented pseudo-experimental approach is ideally suited for investigating phenomena related to micelle formation and phase behavior. Moreover, applications like drug delivery and release, can be addressed in a similar fashion. In this way, simulations can support product design efficiently and avoid costly experiments. 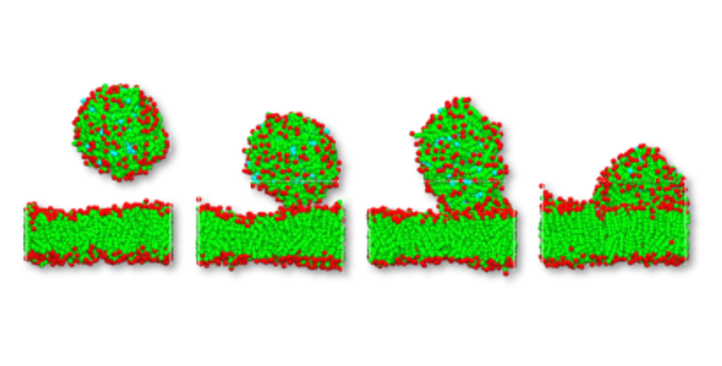 Figure 2: Micelle approaching and merging with a lipid bilayer. Drug molecules in light blue, phospholipids in red and green.

Simulations showed the delivery of a drug into a cell membrane. Simulations reveal how a phospholipid micelle is integrated into the bilayer and the active compound is released into the hydrophobic inside of the bilayer