Catalytic reactions are ubiquitous in chemical industry. Heterogeneous catalysis is dominating the catalysis market. Ecological awareness and economic reasons such as reducing energy consumption during production processes are driving forces for optimization and development of more powerful catalysts. Skeletal catalysts represent an important class of technological relevant materials. They have the advantage that they can be either stored in their active form or activated by a simple leaching procedure. They possess a very high activity and are thus low in cost per unit mass which makes them very attractive for industrial use.

Industry is constantly challenged to improve efficiency in production processes, to lower costs, and to produce in an ecological friendly and sustainable way. Catalytic technology can help intrinsically to achieve these goals, because it typically enhances production efficiency and reduces energy use. In order to improve performance, detailed knowledge of the mechanism is needed. In the case of skeletal or porous catalysts, the porosity is critical for the performance. Therefore, it is important to know how the precursor and final catalyst composition affects the structural properties, especially the porosity. In this case study, we will focus on Raney Nickel, which is an example of a porous, amorphous catalyst, used in industry for hydrogenation reactions. Its active form is prepared from an NiAl alloy precursor which is subject to a leaching process.

Starting from the a crystal structure of NiAl3, NiAl alloy structures with varying compositions were build using MAPS building tools. The precursor structures were subjected to a set of molecular dynamics simulations using the MAPS LAMMPS module. The simulations mimicked the experimental procedure as much as possible, i.e. simulated annealing and quenching. For the active form of the catalyst, again different compositions were taken into account to study the impact of incomplete leaching. Structural properties were analyzed using MAPS analysis tools.

A simulation workflow has been developed to generate amorphous porous structures of Raney nickel catalytic systems. Analyzing the porosity of the active form of the catalyst revealed a dependence of the pore size on both the precursor and the final catalyst composition. It was observed that remaining Aluminum from incomplete leaching has a stabilizing effect on the porosity. 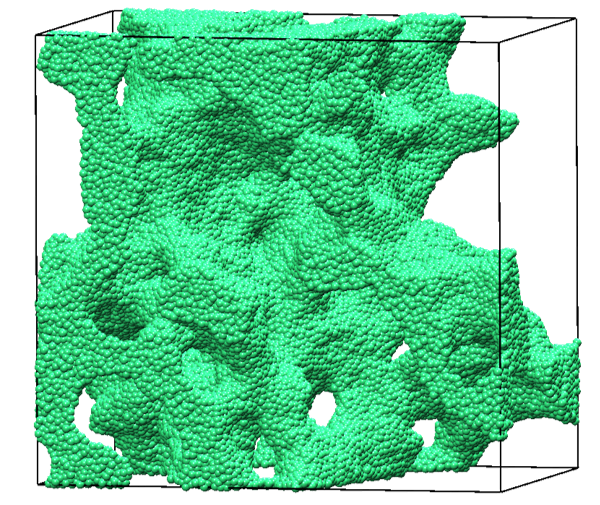 The simulations show a dependence of the porosity on the initial, but also on the final catalyst composition. A stabilizing influence of the incomplete leaching on the porosity was observed