Optimal selection of fracturing fluids based on the soil environment

Oil and gas companies are interested in optimizing their fracturing process by selecting the hydraulic fracturing fluids they use according to the interaction with mixed organic/ inorganic environments (representing a pore in an oil field). This can be achieved by understanding the interactions of the fracturing liquid under various conditions.

Understanding the interaction of an inorganic pore with the fracturing fluid (usually a brine with additives) and the organic crude oil requires to identify the appropriate force field and to build the mixed system. The conditions in the recovery process contain many parameters, for example composition of the crude oil, composition of the pore, salinity and pH of the surrounding liquid together with varying pressure and temperature conditions. All of these need to be combined into an appropriate model reflecting the true conditions but manageable with simulation technology.

Hydraulic fracturing fluids are used for oil recovery in various types of rocks and soils. One type of rock is containing mixed pores from an organic material and an inorganic part, which can be any type of mineral in the respective soil. In molecular modeling this system can be represented by a layered model made up from an organic top layer (represented by Kerogen), an inorganic bottom layer (the clay) and the fracturing fluid with oil in between. SCIENOMICS’ MAPS software was used generate the mixed organic/ inorganic pores. The dynamic behavior of the fracturing liquid was then studied dependent on the composition of the pore, the organic components and the pressure and temperature using molecular dynamics simulations and the LAMMPS plugin within MAPS. Results could the be analyzed, for example for the Heat of adsorption of the various components, the respective Diffusion Coefficients or the individual distributions of the chemicals in the pore.

A multitude of different compositions of pore and liquid under various temperature and pressure conditions were simulated, and very good performing composition of the fracturing fluid was identified for different pore compositions and geometries. Real experimentation under the extreme conditions found at the oilfield would have been much more expensive than the computer experiments performed on the digital twins of the system, hence significant costs were saved by using SCIENOMICS technology. 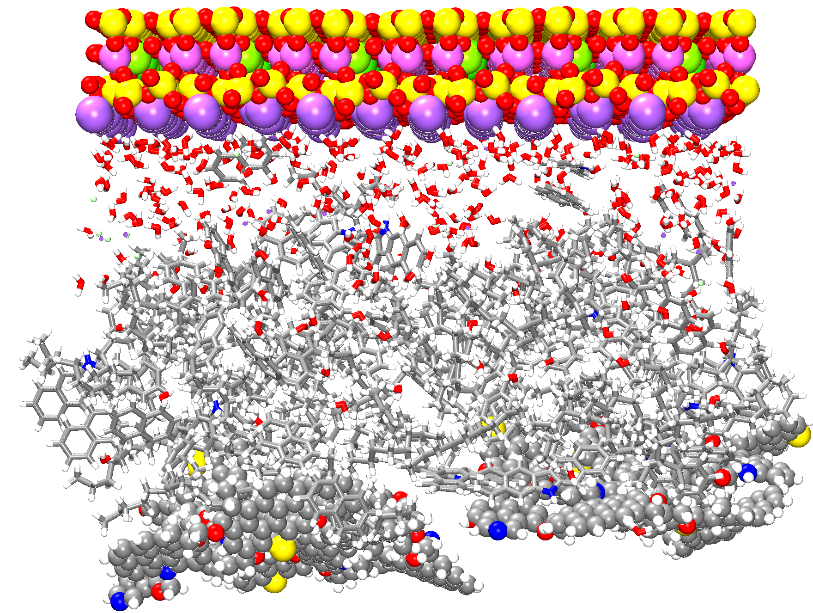 Figure 1: Model of fracturing fluid between a layer of Kerogen and a Clay. Kerogen (bottom) and Clay (top) are displayed in CPK, liquid phase in Ball and Sticks.

Assessing the performance of Fracturing Fluids in different environments

A practical simulation protocol has been established to create 3D realistic models of a pore in an oil field. The Diffusion Coefficients, Heat of Adsorption and Density Profiles of a fracturing fluid have been determined. Well performing compositions of the fracturing fluid were identified.