Computing the Young’s modulus of aluminum

Aluminum is the most abundant metal on Earth and the most widely used non-ferrous metal in industry. It has a remarkably low density, excellent heat and electric conductivity, ability to resist corrosion through passivation, and increased tensile strength at low temperatures. Aluminum is almost always alloyed, which significantly improves its mechanical properties, especially when tempered. As such, it is vital to the aerospace industry and transportation for the production of spacecrafts, automobiles, aircrafts, trucks, railway cars, bicycles; for the production of conductor alloys, motors, generators, capacitors and transformers, as well as in the building and construction industries. Also, it is used in packaging for cans, foil or frames making use of its non-toxic and non-adsorptive nature.

Aluminum and its alloys play critical role in various industrial applications owning to its mechanical properties. Hence, computational strategies that can predict and improve favorable mechanical properties can be of great interest. Here, we apply molecular dynamics (MD) simulations to deform the aluminum structure  applying axial compression under a constant strain rate and compute the Young’s modulus along the direction of the deformation.

Molecular dynamics simulations were performed using the LAMMPS plugin in MAPS. Aluminum was modeled with the Mishin et al. embedded-atom method interatomic potential [1]. The Young’s modulus was obtained from the initial linear part of the stress/strain curve.

Figure 1: Initial (a) and final (b) conformation of Al after subjecting it to a mechanical compression along the x axis.

A 10 ´ 10 ´ 10  Å supercell of aluminum  containing 4000 Al atoms was constructed and equilibrated at T = 300 K and P = 0 bar for 20 ps under isothermal-isobaric (NPT) dynamics. Then, using the NPT ensemble and a time step of 1 fs, a deformation under a constant strain rate of 1010 s-1 was imposed for 20 ps in the x axis. The initial and final structures of this simulation are represented in Figure 1-a and b. The computed strain was plotted as a function of the stress (Figure 2). From the linear part of Figure 2, we obtained the Young’s modulus of 66.3 GPa, which is in very good agreement with the experimental value of 69 GPa. 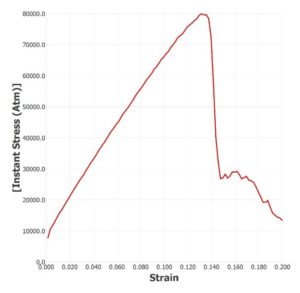 Figure 2: The stress-strain curve obtained upon 20 ps NPT deformation along the x axis.

The present case study shows that molecular dynamic simulations with the LAMMPS plugin of MAPS can accurately reproduce the experimental value of the Young’s modulus of aluminum, and thus, can be applied for prediction of mechanical properties of any material of interest.

Supercell of aluminum was deformed under a constant strain rate in the x direction.  The Young’s modulus was obtained from the stress/strain curve, in excellent agreement with the corresponding experimental value.